The Scientific Advisory Committee on Nutrition (SACN) has published its report on ‘Feeding in the first year of life’, providing recommendations on infant feeding from birth up to 12 months of age.

“We welcome the SACN ‘Feeding in the first year of life’ report and having timely access to the latest advice and recommendations on infant feeding, especially reinforcing the existing guidance on breastfeeding and the introduction of solids.

“I would like to advise all health visitors to read the report and its recommendations and ensure that they use it to inform all nutritional advice they give to parents.” 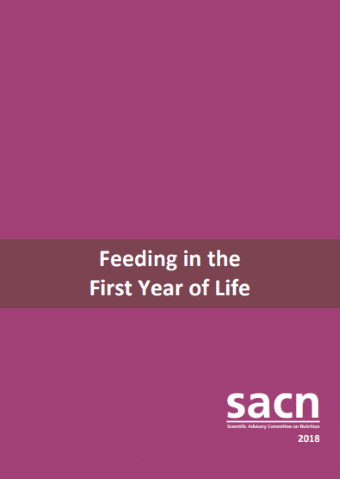 SACN recommends that a wide variety of solids foods, including iron-containing foods should be introduced in an age appropriate form from around 6 months of age.

SACN recommends that advice on complementary feeding should state that foods containing peanut and hen’s egg can be introduced from around 6 months of age and need not be differentiated from other solid foods. The deliberate exclusion of peanut or hen’s egg beyond 6 to 12 months of age may increase the risk of allergy to the same foods.

Breastfed infants up to 12 months should receive a daily supplement containing 8.5 to 10µg of vitamin D (340-400 IU/d). Formula-fed infants do not need a supplement unless consuming less than 500ml of infant formula a day.

Go to Feeding in the first year of life: SACN report

A joint statement assessing the health benefits and risks of the introduction of peanut and hen’s egg into the infant diet before six months of age in the UK.

The Scientific Advisory Committee on Nutrition (SACN) and the Committee on Toxicity of Chemicals in Food, Consumer Products and the Environment (COT) have published a joint statement outlining the assessment undertaken by the joint SACN-COT working group on the timing of introduction of peanut and hen’s egg into the infant diet before 6 months of age in the UK. This paper summarises the findings of the working group and provides consensus advice to government.

The benefit-risk assessment indicated that there were insufficient data to demonstrate that the introduction of peanut or hen’s egg into the infant diet between four and six months of age reduced the risk of developing food allergy to any greater extent than introduction from around six months.

Reasonable data exist to demonstrate that the deliberate exclusion or delayed introduction of peanut or hen’s egg beyond six to twelve months of age may increase the risk of allergy to the same foods.

The government should continue to recommend exclusive breastfeeding for around the first six months of life. Advice on complementary feeding should state that foods containing peanut and hen’s egg need not be differentiated from other complementary foods. Complementary foods should be introduced in an age-appropriate form from around six months of age, alongside continued breastfeeding, at a time and in a manner to suit both the family and individual child.

The deliberate exclusion of peanut or hen’s egg beyond six to twelve months of age may increase the risk of allergy to the same foods. Once introduced, and where tolerated, these foods should be part of the infant’s usual diet, to suit both the individual child and family. If initial exposure is not continued as part of the infant’s usual diet, then this may increase the risk of sensitisation and subsequent food allergy.

Families of infants with a history of early-onset eczema or suspected food allergy may wish to seek medical advice before introducing these foods.