More support for victims and survivors of sexual assault and abuse

Victims and survivors of sexual and domestic abuse are being encouraged to come forward for NHS help and care, as part of a major campaign backed by a £20 million boost to specialist services.

The new campaign comes as a survey of more than 4000 people across the country, conducted by Censuswide, found that two in five people aren’t sure, or do not know where to get help after being sexually assaulted, with 72% unaware there are NHS specialist sexual assault services who can offer confidential support.

The campaign, which is championed by former Prime Minister Theresa May and the Duchess of Cornwall will raise awareness of the specialist support offered at dozens of sexual assault referral centres (SARCs). They offer 24/7 confidential specialist, practical, medical, and emotional support to anyone who has been raped, sexually assaulted, or abused – regardless of when the incident happened.

The SARCs campaign is backed by Ruth May, Chief Nursing Officer for England and is being promoted by NHS Safeguarding via the national safeguarding networks. A campaign film has been produced alongside a powerful animation which addresses the common questions and concerns many people face after experiencing sexual assault, abuse, or rape, including not knowing who or where to turn.

“Health visitors, through their universal reach into all families, are well placed to identify and support people who have been sexually assaulted or abused. The iHV urges all health visitors to familiarise themselves with the SARC resources and would value their support with raising awareness of this campaign.”

iHV responds to national review “The Myth of Invisible Men”

The publication of yesterday’s hard hitting national review, “The Myth of Invisible Men”, by the independent Child Safeguarding Practice Review Panel, provides a stark reminder that babies are being let down in this country and, for some, the consequences are catastrophic and life-changing.

“This hard hitting report highlights yet again that babies pay the ultimate price for the failings in the systems designed to safeguard and protect them. Babies cannot speak – they rely on the adults around them to protect them and, when this is not possible or their parents need additional help and support, they need to live in a world where there are skilled professionals who can spot their distress and step in to help. This is why we are calling on the Government to invest in health visiting as a vital safety net for babies and young children.”

The report highlights that 35% of all serious incident notifications involve serious harm to babies, the vast majority involving physical injury or death. This is the biggest category of all notifications that the Panel sees. In the majority of cases where babies have been injured or killed, men are the perpetrators – research suggests that men are between 2 and 15 times more likely than women to cause this type of harm in under 1s. The greater prevalence of male abusers sits alongside a description of men as too often being ‘hidden’ or ‘invisible’ to safeguarding agencies.

The review focuses on non-accidental injury (NAI) in infants under the age of 1 and seeks to answer the following questions:

The review concludes that there is “an urgent need to improve how the system sees, responds to and intervenes with men who may represent a risk to the babies they are caring for. For this group of men, the role that they play in a child’s life, their history of parenting and their own experiences as children and how this effects them as adults, are too frequently overlooked by the services with responsibilities for safeguarding children and for supporting parents.” 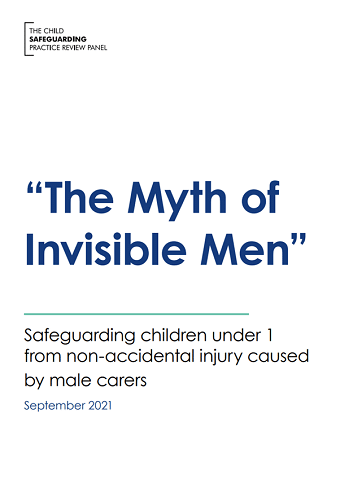 Following today’s statement from Ofsted which says that abuse and neglect of babies is up by a fifth compared to the same period last year (as covered in the Guardian here and on by the BBC here), The First 1001 Days movement has issued a statement – read part of it below:

We are deeply saddened to see reports today about the awful harms suffered by babies during the pandemic. Ofsted reports that the numbers of babies who have suffered serious injury through abuse or neglect during the Covid pandemic is up by a fifth on the same period last year, and eight have died from their injuries.

These are not the only babies who will have suffered harm as a result of the pandemic, sadly they are only the tip of the iceberg. Many other babies will have experienced adversity and emotional trauma during these difficult times.

The harms are undoubtedly a result of the “pressure cooker” of the pandemic, and the enormous additional stresses faced by families. This additional stress was all too predictable, as we have warned since the spring about the impact that the pandemic and lockdown have had on families during this crucial period of their children’s early development.

Some of these harms were preventable. The suffering experienced by babies might have been identified early, prevented or mitigated with professional support. But the pandemic caused a “perfect storm” where vital services and support were withdrawn from many families at a time when they needed it most. The redeployment of health visitors, reduction in contacts with families by many services, and pivot to digital and telephone service delivery – where babies are often invisible – all hampered services’ ability to protect our youngest and most vulnerable citizens.

Many charities, including those in the Movement, have been warning of these harms for more than six months, but little action has been taken. There must be no more delay, Government must act quickly to strengthen vital services that can prevent future harm to babies and support the recovery of all of the families who have already suffered as a result of this pandemic.

“As a member of the F1001D Movement we fully support their statement. It is very sad that the number of babies losing their lives in infancy has increased, especially since the onset of the COVID-19 pandemic. Sadly this was predicted early in lockdown. All the research suggests that, with the right resources, these figures should be reducing not increasing. We really hope that the publication of these figures will encourage government to take investment in the early years of life as seriously as they do other critical times in a person’s life course. Indeed, with sufficient investment in early life, large sums of money could be saved across the later life course.”

The F1001D Movement calls on Government to:

Babies must not pay the price for measures introduced to protect the health of the wider population. Government must protect all our children – from pregnancy onwards – during this difficult time.

Further to the Good Practice Points and Parent Tips on Keeping babies and young children safe around dogs in the home which we launched last year, we are delighted to share a new, free online course from The Links Group – Understanding animal welfare in violent homes – designed to help frontline staff understand the link between family abuse and animal abuse.  This new online course is aimed at all professionals who have a responsibility to safeguard vulnerable children, young people and adults at risk.

The Links Group is a multi-agency interest group that promotes the welfare and safety of vulnerable children, animals and adults so that they are free from violence and abuse.

The Understanding animal welfare in violent homes course has been written to provide a basic understanding of what animal abuse is, how to spot the signs, as well as to understand the recognised link between family abuse and animal abuse, and understand what to do if you have suspicions of abuse.

Co-author of the course, Vicki Betton, who works for veterinary charity PDSA and is an officer of The Links Group, said:

“The veterinary profession is now familiar with the concept of the ‘battered pet’, and recognises that there are sometimes interrelationships commonly known as ‘links’.

“This course uses our animal welfare expertise to help human healthcare colleagues to recognise potential concerns about pets in the homes they visit, even if the pet is not being directly harmed.

“By undertaking the course, human healthcare professionals will have a better understanding of animal wellbeing and will know where to seek advice if they suspect there is an issue.”

See the links below to access the Good Practice points and Parent Tips on Keeping babies and young children safe around dogs in the home (please note that the GPP is available to members of the iHV only. If you’re not a member, please join us to get access to all of our resources):