Reflections on Begin Before Birth conference, London for #IMHAW17

A reflective blog written by Rachel Stephen, iHV, on the Begin Before Birth conference, held at Imperial College, London, on 8 June – in support of this week’s Infant Mental Health Awareness Week (#IMHAW17). 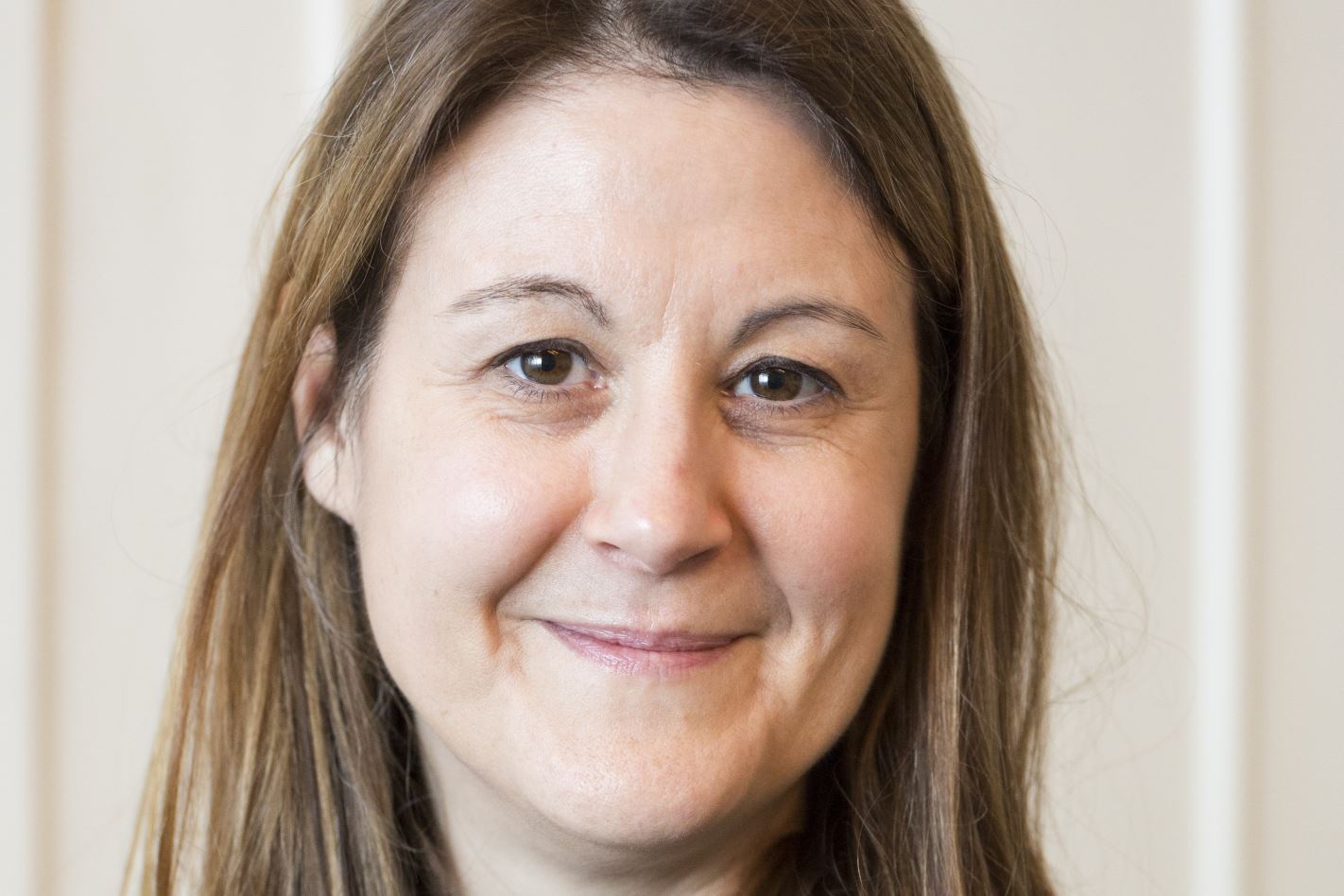 Having spent the year facilitating multi-professional training in Perinatal and Infant Mental Health across the country for the Institute of Health Visiting (iHV), I did wonder what I would learn at the annual Begin Before Birth Conference, organised by Imperial College London on 8 June. But it was such a great day to connect with people passionate about maternal health during pregnancy and full of inspiration!

Perinatal Depression and the effects on the child

The day started with Dr Rebecca Pearson, University of Bristol, who spoke about her research on Perinatal Depression and the effects on the child. Rebecca’s presentation was captivating and she simplified an incredibly complex topic. What I took away most from her presentation is that it is perhaps harder to moderate the effects of antenatal depression than postnatal. Rebecca has carried out research on babies of women who experienced hyperemesis–gravidarum, this may be a time-limited condition requiring hospitalisation. Women who experience the condition talk about the enormous emotional and physical stress that the condition puts them under. Rebecca’s team found an association between the condition during pregnancy and offspring Autistic Spectrum Disorder. It should be noted that effect sizes were small and the work is still being peer reviewed, however it continues to add weight to the effects of stress in pregnancy. 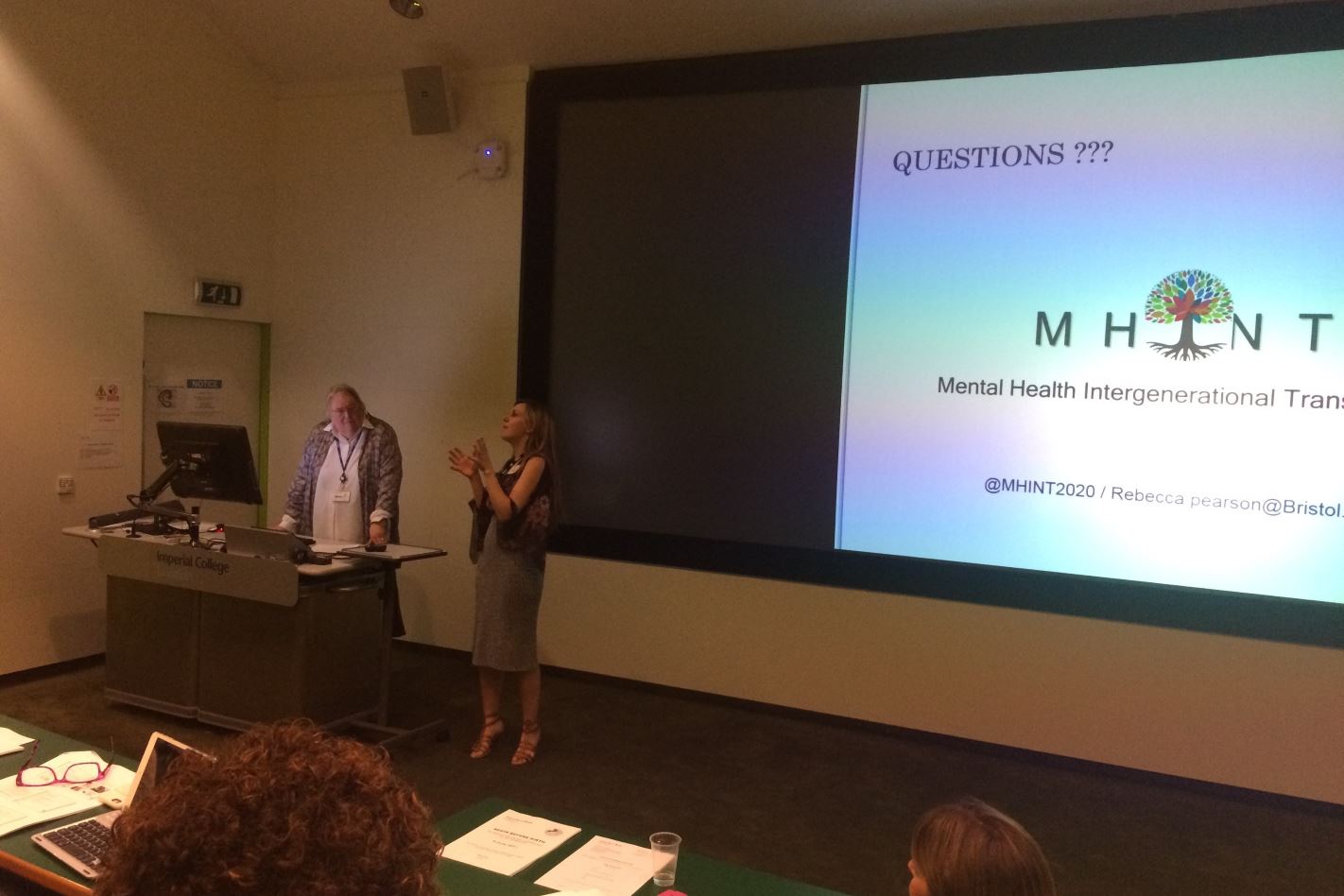 Maternal obesity during pregnancy and the effects on the child

Professor Rebecca Reynolds, Queen’s Medical Institute Edinburgh, gave a fascinating talk on maternal obesity during pregnancy and the effects on the child. Strikingly, statistics show that 1 in 5 pregnant women are obese. Rebecca is a member of a team in Edinburgh that runs an Antenatal Metabolic clinic specifically for pregnant women with a BMI over 40. Offspring of women with a BMI over 40 are at risk of a long list of adverse neuropsychiatric and neurocognitive outcomes. However, there is evidence that ‘stress’ hormone exposure could underpin these observations. As an aside, research from Sweden shows that high maternal liquorice consumption can also impact on offspring’s cognitive and psychiatric symptoms (women should note that some herbal teas contain high levels of liquorice). 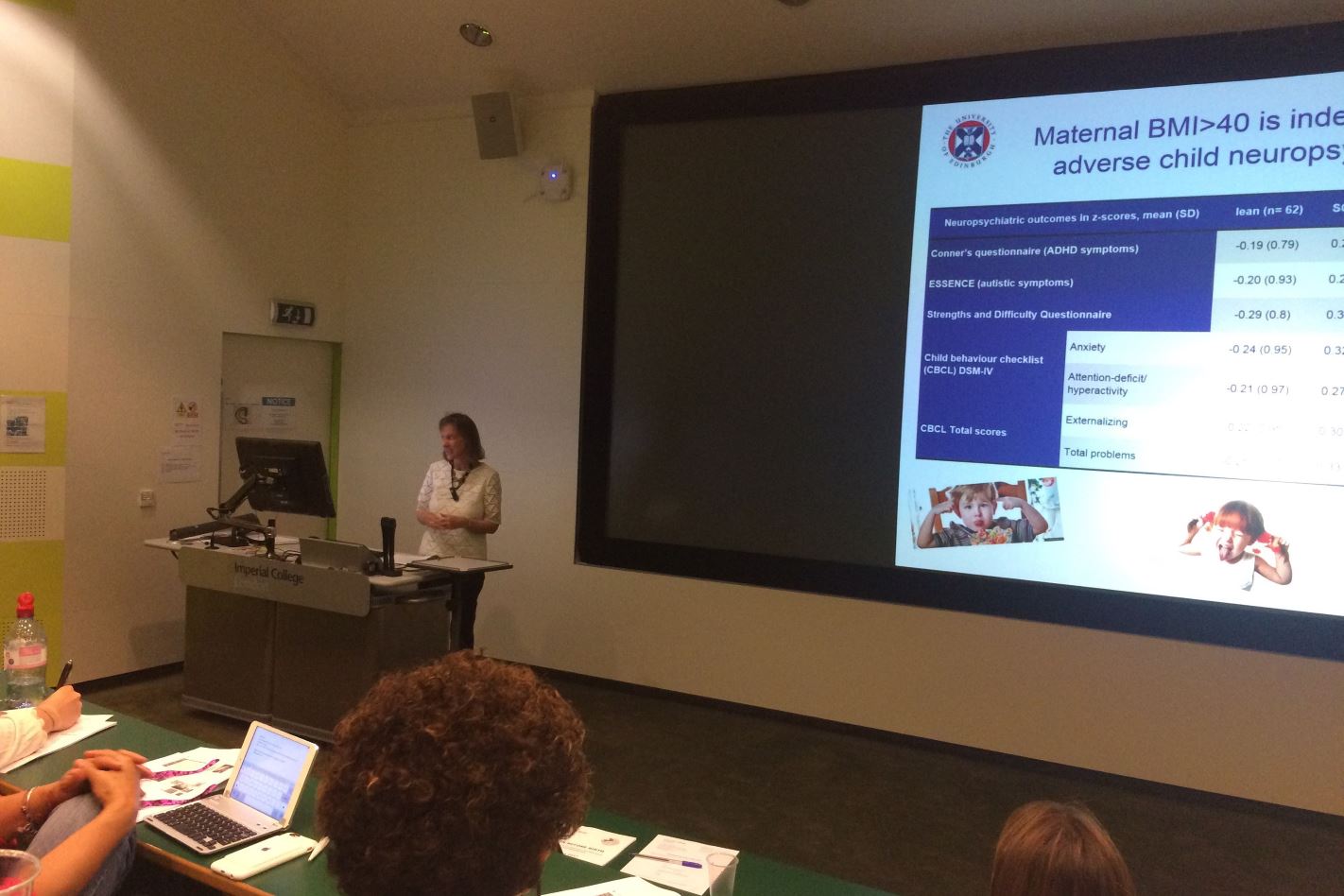 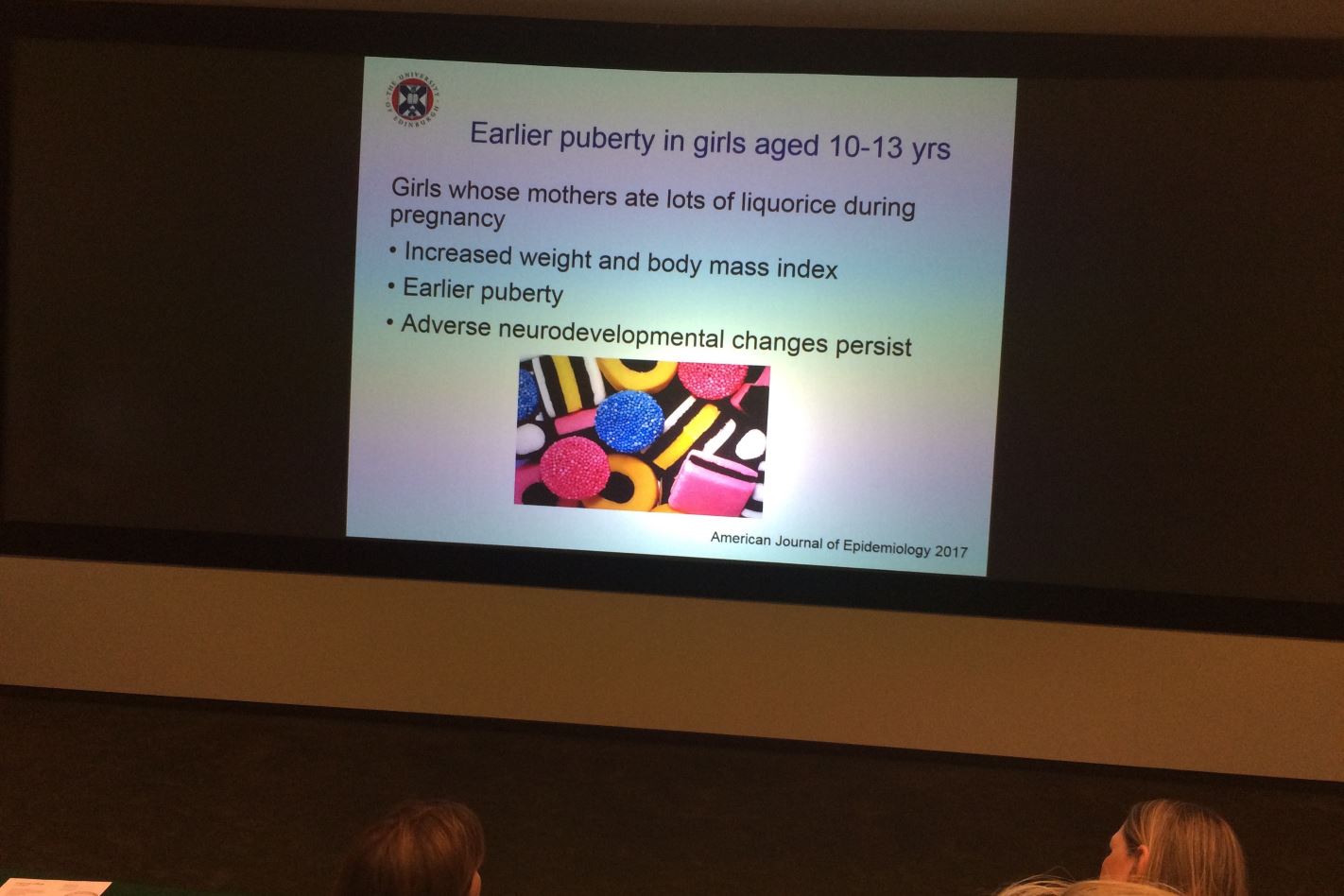 Judith Rees, from the Stefanou Foundation, spoke about their programme `Healthy Relationships: Healthy Baby Programme’ which has been designed to break the cycle of domestic violence and help parents overcome trauma. Judith highlighted the importance of practitioners being trauma informed and showed that those with 4 or more Adverse Childhood Experiences (ACEs) are likely to be involved with crime or experience/ perpetrate domestic violence. Breaking the cycle is crucial, and Judith showed an impactful video focusing on how to do just that http://www.aces.me.uk/in-wales.

Composer Jennie Muskett introduced us to one of her compositions written specifically for pregnant women to listen to in the antenatal period. The tempo of her music is linked to “parentese” which the infant brain is known to prefer. The music is also designed to help the mother think about and feel connected to her baby. These can be found shortly on www.startofsound.com .

Professor Ian Jones, Perinantal Research Group Cardiff University, spoke on the causes and treatment of Postnatal Psychosis. He reminded us that risks are much higher in first pregnancies for women with bi-polar. He also spoke about the importance for families to receive psychological input after the condition resolves. Families are often traumatised and fearful about subsequent pregnancies – it is important that we continue to support them through this.

Dr Kirsten Asmussen spoke about the work of The Early Intervention Foundation. One of the key messages from the talk was that there is already a good choice of effective interventions addressing children’s compliant behaviour. However, there is less choice in programmes addressing attachment security and more research is required in this area. 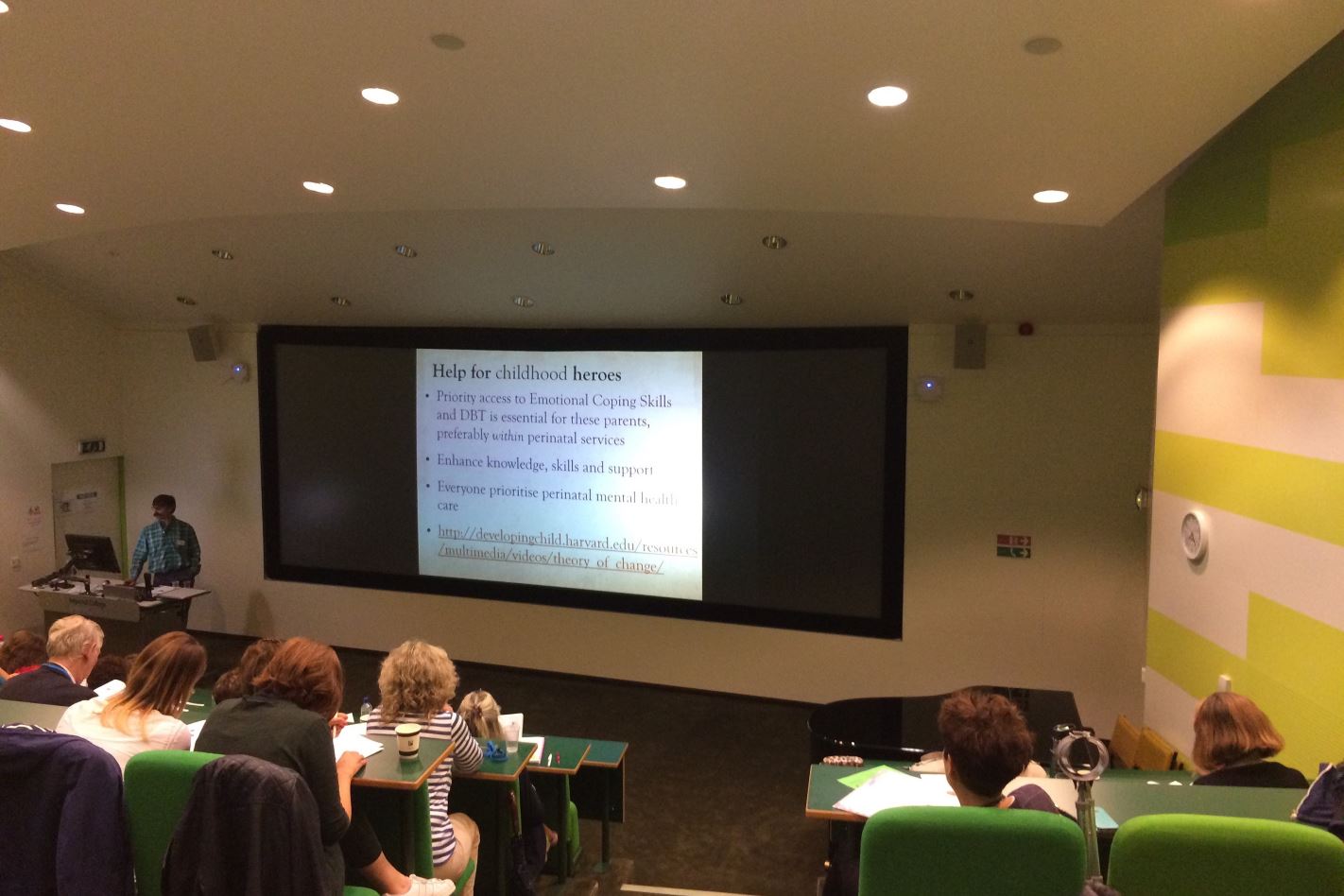 Dr Alain Gregoire, Maternal Mental Health Alliance, gave an inspirational and honest presentation at the end of the day. He told the audience that he had retired from clinical work, which was a pity as it was only in the last ten years of his career that he really “got it”. Alain is passionate about the importance of recognising the effects of transgenerational trauma which he believes leads to trauma across the generations. Eighty percent of people with ‘Borderline Personality Disorder’ were abused as children. Eighty percent of infants of mothers with Borderline Personality Disorder are disorganised in their attachment at 13 months. This is the same percentage as is found in maltreated children, and 30% of maltreated children develop Borderline Personality Disorder. What should practitioners do? First; listen, recognise, diagnose, explain and empower. Tell clients who have survived abuse and childhood trauma just how remarkable they are. Validate their feelings and reassure them that they can be helped and supported. Help for these ‘childhood heroes’ should include priority access to Emotional Coping Skills and Dialectic Behavioural Therapy preferably within the perinatal services.

So, the message from this inspiring conference  is clear –

we need to continue to champion and advocate for our perinatal population in order to protect our children and future generations to come.