In October 2020 I was awarded the British Empire Medal in the delayed Queen’s birthday honours list, for services to vulnerable families in Guernsey. The award was presented a year later at Government House in Guernsey when family and friends were able to travel. 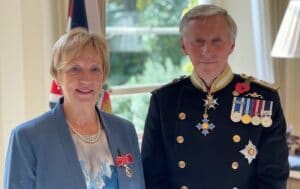 To be described as an inspirational health visitor was humbling but also invoked a sense of pride in what I had been able to achieve in a career I have loved. I have worked with so many amazing health visitors and with some incredible families who I have been privileged to be alongside on their journey. I share my story as a means of celebrating this wonderful profession.

I became a health visitor in 1993, after an initial career as a children’s nurse in Manchester and Bermuda. Most people think of Guernsey as an affluent island which indeed it is, but this has the effect of poverty and deprivation being largely hidden to the casual observer, though not of course to health visitors!

Towards the end of my career, I took a gamble! I moved from my post as a team leader in health visiting to work as the first health professional within the States of Guernsey children’s social services, in a team named the Family Partnership team. It was here that I was able to develop and lead the Guernsey Young Parents’ Partnership (GYPP). Guernsey is a self-governing British Crown Dependency and we do not have the NHS. For this reason, and also because our birth rate is too low (around 650 births a year), we were unable to apply to join the Family Nurse Partnership (FNP). So, with support from my manager, I wrote a bespoke programme. The service developed and I led a small team of four which included another health visitor, a social worker and a family support worker. As with FNP, GYPP is an intensive home visiting programme for first time young parents starting around 16 weeks of pregnancy until their child is two years of age.

By the end of my career, I became involved in the 1001 Critical Days Agenda and attended several meetings of the All-Party Parliament Group in Parliament. I was invited to return to children’s services to work alongside a clinical psychologist to develop the agenda in Guernsey. I was employed by a Guernsey charity, Every Child Our Future (ECOF). At the end of a fruitful year, where the agenda was written into the Children and Young People’s Plan for Guernsey and Alderney, I left paid employment and joined the Board of ECOF.

I had become convinced that in order to progress the work within Guernsey we should develop a children’s centre. In 2017 Bright Beginnings Children’s Centre, the first children’s centre on the island opened. We have built our services around our vision to give every child the best start in life and our mission to help families build a secure and loving relationship with their children. We initially welcomed around 10 families a week and now see about 130. We have built an extensive range of programmes, and work in partnership with a number of professionals, including, of course, former colleagues in health visiting and social services. This year we attracted the attention of our Government and achieved funding to ensure our services can develop and progress, an excellent example of working across sectors.

We have built a strong, dedicated team to lead the work. A typical week at the centre involves a range of groups, activities and 1:1 support. Examples are Stay and Play sessions, Mellow Parenting programmes, Beyond Blue (our perinatal mental health service), Just Dads group, a range of programmes under the Blossoming title- bumps, babies and toddlers, baby massage, musical babies and toddlers, Bosom Buddies and post-natal yoga, as well as health visitor clinics, speech and language sessions and crèches. All our activities are provided without charge to ensure that no family is excluded. Our team work hard to reach those families who are isolated and offer home visits to inform parents of what is on offer to them. We benefit from a number of loyal volunteers who help in our low-cost cafe, the hub of the centre, and in the various crèches which enable parents to join groups. Bright Beginnings has an attached nursery and preschool where, as a result of a States of Guernsey grant, children from low-income families are able to attend without charge to benefit from education and care alongside their peers.

Bright Beginnings is a member of the Parent-Infant Foundation and 1001 Days Movement and keeps abreast of new research and best practice. Alongside my Board work, I also volunteer in the centre. I have retained a keen interest in other areas which energised me during my career, namely housing and homelessness, sexual health, poverty and disadvantage and sit on the Boards of charities working to improve the lives of islanders. I have recently joined the Board of the Social Investment Fund which works to help build greater partnership and joint working between the States of Guernsey and the charitable and third sector.

I have learned so much along the way, not least from the young women and men who are loving, and loved, parents, and who overcome so many difficulties when life had sometimes dealt them a tough hand.