A preventable infection that can devastate families – a screening test away!!!

I want to take you on an emotional journey which highlights the need for Health Visitors, GPs and Midwives to understand Group B Streptococcus (GBS) Infection and raise awareness with mothers to be. The information is taken from http://walkingforadam.blogspot.co.uk/

“GBS is the UK’s most common cause of life-threatening infection in newborn babies.  Without preventative medicine, 700 babies a year will develop GBS infections.  Most recover fully but around 75 will die and another 40 survivors will be left with problems.” (http://www.gbss.org.uk)

Charlotte and Chris Cheshire’s son, Adam, now 4 years old, had GBS Meningitis which has left Adam hearing and visually impaired; autistic; globally developmentally delayed and asthmatic.  He is dependent on his family to keep him safe as he has no sense of danger or risk.

Within hours of a normal pregnancy and birth, Adam started grunting, stopped breathing and started having seizures. He was put onto life support and placed in an induced coma.  His body was swollen and bright yellow with jaundice. Adam was diagnosed with Group B Strep Meningitis.

Adam fought for his life for six days until his breathing began to strengthen and a few days later, doctors were able to remove his ventilator. Chris and Charlotte treasure the photo of Adam with his eyes open for the first time. 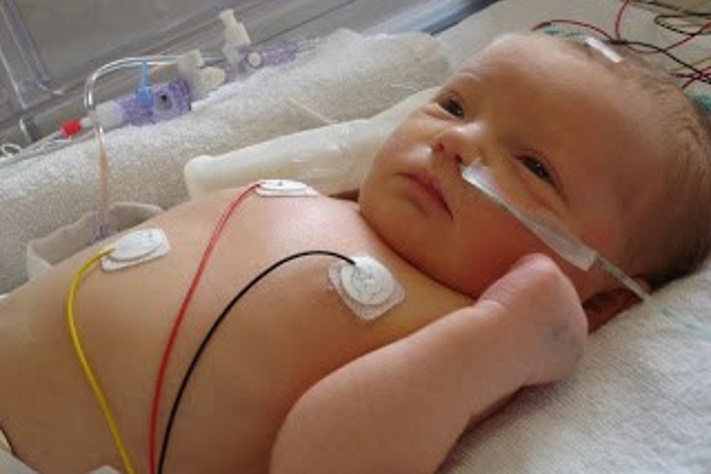 Adam opens his eyes for the first time

Adam’s seizures eventually ceased, however he had early signs of brain damage.  Charlotte nursed him twelve hours a day; sitting in a rocking chair in NICU as Adam slept in her arms.

Finally, after twenty-three long days and against all the odds, their little miracle was strong enough to be discharged from hospital.  Since then, due to his special needs, he is under the care of five Consultants, four therapists and attends a Special Needs Nursery which will translate to a Special Needs School.  The family use Makaton sign language and Picture Exchange Communication System (PECS) cards to attempt to help Adam communicate, however the level of care he requires is immense and ongoing.

Charlotte and Chris do not know what the future holds, however they are absolutely in love with their little miracle and devoted to his care. Charlotte and Chris encourage you to understand and spread the message about the Group B Strep and the Support Charity.

GBS is preventable through a private screening test in pregnancy costing c.£ 35.00; and with a course of penicillin if infected. If the NHS were to provide this screening the cost per screen would be c. £12.00. How can you raise awareness to prevent this devastating infection? July is International Group B Strep Awareness Month.