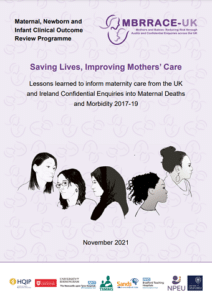 This year’s Saving Lives, Improving Mothers’ Care 2021 report shows that pregnancy remains very safe in the UK. In 2017-2019, of the 2,173,810 women giving birth, 191 women died during or up to six weeks after pregnancy; 495 during or up to one year after their pregnancy. Between 2017 and 2019, there is a small, but not statistically significant, decrease in the overall maternal death rate.

Other inequalities continue to grow. Women living in the most deprived areas are twice as likely to die than those who live in the most affluent areas. Social services were involved in the lives of 17% of women who died. The number of women who are known to be experiencing multiple disadvantages when they die remains at 8%. Women in these situations will often face mental ill-health, domestic abuse and/or misuse substances. However, these and other issues are poorly recorded, so these figures should be treated as a minimum estimate. Reporting of these and other complex social factors needs to improve.

A mother who contacted us, responds:

“I very nearly died and my children very nearly had no mum and yet it’s still not taken seriously by everyone. Like with the budget for health visitors being cut – how is it right that mums just sit at home wanting to die but the government still doesn’t want to fund a resource to be helping pick these mums up.”

Responding to the report and its recommendations, Melita Walker, Head of Mental Health at the Institute of Health Visiting, said:

“We are deeply saddened by the latest MBRRACE report and offer our heartfelt sympathy and condolences to all the families who have lost their loved one through such tragic circumstances.

“It is worrying to hear, yet again, of the continuing impact of health inequalities on the lives of so many. If we are to save lives, we must work together to make sure that all families have access to the same high quality mental and physical health care. This requires a whole system approach with fully integrated systems of care working well together. Health visitors play a vital role in identifying and responding to mothers at risk, offering timely and life-saving intervention, including timely referral on to specialist services when needed. But they can only do this effectively, if they are available in sufficient numbers, with the right training and capacity.

“It is especially sad that almost a quarter of all deaths of women during pregnancy or up to a year after the end of pregnancy were from mental health-related causes and that for 67% of women who died by suicide, improvements in care might have resulted in a different outcome.

The MBRRACE-UK Saving Lives, Improving Mothers’ Care – Lessons learned to inform maternity care from the UK and Ireland Confidential Enquiries into Maternal Deaths and Morbidity 2017-19 report is available as: