The Institute of Health Visiting (iHV) is delighted to announce the publication of its new report “The economics of health visiting: a universal preventative child and family health promotion programme”, which reviews the economic impact of early intervention services on the lives of children, families and society.

This is a member only document. Non health visitors who work in public health related areas may join the iHV as Friends to access all our documents.  As a charity, the iHV relies on its member income to produce such documents. 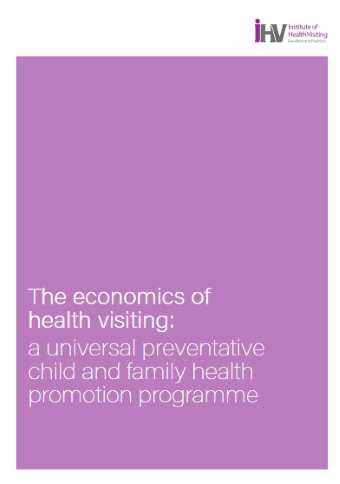 Early intervention is taking action as soon as possible to tackle problems for children and families before they become more difficult to reverse.  According to the Early Intervention Foundation (EIF), damaging social problems affecting young people such as mental health problems, going into care, unemployment and youth crime costs the Government almost £17 billion a year.  However, research has proven that investment in early childhood development saves long-term costs and improves children’s outcomes – and the earlier the investment, the greater the return.

“The earliest years of children’s lives have a powerful influence on their subsequent development and health, with benefits both to themselves and to society that last beyond childhood – and health visitors play a critical role in these early years.

Our report shows that early years interventions, such as those covered by the universal health visiting service, deliver both social and economic benefits, including reducing long-term costs and improving outcomes, as well as increasing the economic productivity of the population.”

The focus of health visiting, an advanced and specialist public health nursing service, is the whole population of children in the foundation years (from pregnancy to age five). In particular, health visitors engage on a universal basis with the families of all children in the first ‘1001 critical days’ from conception to age two. This is described as the ‘age of opportunity’ (WAVE Trust, 2014) when the impact of social and other adversity can become biologically embedded in brain development – showing in a child’s social, emotional, cognitive and physical developmental outcomes.

“Investing in an early intervention service, such as universal health visiting, reduces inequalities in the earliest years of a child’s life – giving all children the most important thing, the best start in life.”