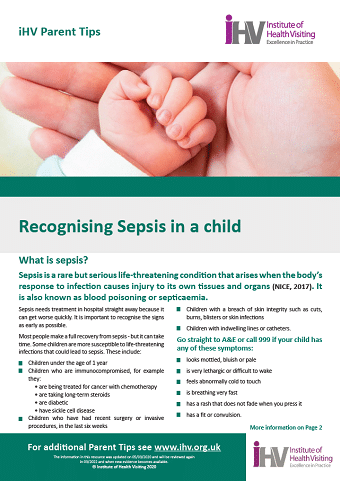 Sepsis is a rare but serious life-threatening condition that arises when the body’s response to infection causes injury to its own tissues and organs (NICE, 2017). It is also known as blood poisoning or septicaemia.

Sepsis needs treatment in hospital straight away because it can get worse quickly. It is important to recognise the signs as early as possible.

This Parent Tip joins our suite of Parent Tips  – our helpful factsheets to help parents to find expert advice on key areas of looking after their new baby from when they are born to when they go to school. Written by experts in the field, they cover topics such as feeding, health, behaviour and development, and are based on up-to-date research and the experience and knowledge of real-life health visitors working across the UK.

The iHV is delighted to share new Good Practice Points:

These Good Practice Points, authored by Elizabeth Tinsley FiHV, Sister Paediatric A&E, set out what health visitors need to know about recognising Sepsis in a child.

They outline some practical measures along with up-to-date evidence and references.

Please note that these GPPs are available to iHV members only.

The Clinical Policy Unit at NHS England has provided links to resources around sepsis which would helpful for parents/and carers of children. So please do share with your parents and families.

The resources they recommend are:

NHS Choices video - Caring for Children with Fever at Home

The Sepsis Trust - Handbook for parents

For our members, we keep links to resources in our A-Z Library of resources. Please see  our Sepsis resource page

Parents often have regular contact and an ongoing relationship with health visitors and school nurses; as such they may be the first point of contact for parents who have a concern. Services provided by health visitors and school nurses are not intended to provide a first line treatment or diagnostic service for acutely unwell children, however, when an unwell child attends their service, the practitioner must have the knowledge to support parents to make a decision about the most appropriate course of action and signpost them to the appropriate help based on the child’s presenting symptoms.

Health visitors and school nurses should therefore be aware of the clinical signs and symptoms of sepsis in children and of relevant national guidelines. They need to have clarity on actions that need to be taken and be clear about the advice for parents (NICE CG160, 2013).

Secretary of State for Health, Jeremy Hunt, has committed to a campaign to support earlier diagnosis of sepsis in young children.

The campaign is calling on those who engage with parents of under 5s to help raise awareness by displaying the free resources available from the Public Health England Campaign Resource Centre.

Secretary of State for Health, Jeremy Hunt, has committed to a campaign to support earlier diagnosis of sepsis in young children.

The campaign is calling on those who engage with parents of under 5s to help raise awareness by displaying the free resources available from the Public Health England Campaign Resource Centre.

Health Education England e-Learning for Healthcare (HEE e-LfH), in partnership with the Royal College of General Practitioners, has launched an e-learning programme for healthcare professionals about sepsis.

“Think Sepsis” aims to improve the diagnosis and early management of sepsis in primary care.  The e-learning includes five sessions:

Every year 123,000 cases of sepsis occur in England and there are approximately 37,000 deaths.   Prompt recognition of sepsis and rapid intervention will help reduce the number of deaths occurring annually.

The e-learning programme has been developed for GPs and healthcare professionals working in primary care including nurses, health visitors, midwives, pharmacists and paramedics. “Think Sepsis” follows the recommendations of the new NICE guideline on sepsis recognition, diagnosis and early management which were launched this week.

To complement the e-learning programme a film has also been developed.  The short film features the story of Jason Watkins and Clara Francis who tragically lost their daughter Maude aged just three to undiagnosed sepsis in 2011. The film highlights the key signs that healthcare workers should be looking out for and asks them to think: ‘could this be sepsis?’ when assessing and diagnosing patients.

To view the film: Think sepsis: a film for all healthcare workers involved in the care of sick children